Zine Fairs, or a Blizzard on a trestle table

I started making zines on Christmas Day 2014.  There was no snow, no blizzard then; that was reserved for later wen I started selling zines at fairs.  Zine events are white; really white, no matter where they happen in the U.K.  With a couple of exceptions* I’m often the only black person tabling, though there are usually a some POC attending as shoppers. The Blizzard Scale explained: http://j-applebee.tumblr.com/post/160014567848/the-blizzardscale

I’ve had discussions recently with a few organisers of zine fairs held in different parts of the country about the lack of diversity at their fairs.  Their responses showed a powerful ignorance of the needs and issues facing zine creators who are marginalised or oppressed (POC, Disabled, Working Class, Older, and LGBT+.  All these groups are likely to be poorer, so costs for tabling, production and travel to the events will be difficult to budget for.

Issues and Solutions:
Finding out about zine events is another issue, as plenty of fairs attract tablers by word of mouth or invitation only, so marginalised creators are unlikely to find out about these events until the publicity for attendees goes out.  I’ve been told by a one-woman zine fair organiser, “We can’t force marginalised creators to approach us for tables!”  This way of thinking is plainly ridiculous.  If organisers truly want diversity, then they have to make an effort to attract us.  This could be as simple as doing a general call for tablers, but stating you’re looking for marginalised creators too; having a quota, or offering tables for a reduced fee (even if that reduction is small).  These things show that you’re aware of us and want us at your zine fair.

Access:
I’ve tabled at zine fairs held in the basement of a pub, where zero customers visited.  The space was down a steep staircase, making it inaccessible to creators and customers with mobility issues.  This lack of consideration made me despair.  Accessibility isn’t just just for those in wheelchairs – I’ve also tabled at a fair in the back room of a noisy pub where my tinnitus played havoc the whole time.**. On one horrible occasion, a zine fair was held in a London bookshop which had a racist book prominently displayed there.

The U.K is a place with marginalised and oppressed people living in every part of it.  Zines are at its heart a tool created for these groups whose voices are often ignored and silenced.  Nobody would know that from the makeup of most zine fairs though.

Penfight Distro https://penfightdistro.com/zine-events/ has a calendar of Zine fairs throughout the year.

@POCZines http://poczineproject.tumblr.com is a mainly U.S based group that supports Zinesters of Colour

**There is NO REASON to hold events in a pub nowadays.  Yes, pubs can be cheap or even free, but the majority of pubs are also very unfriendly/off-putting/inaccessible for:
Women & Femmes
LGBT+ folk
Disabled
People of Colour
Religious people (esp if they wear religious dress)

I gave a talk recently about homelessness and minorities.  A summary and my slides can be seen here http://www.neurofamilymatters.co.uk/news/2016/10/25/invisibility-and-homelessness

I was homeless 23 years ago, but its effects have never left me.  The fear of being so vulnerable and alone as a black disabled sometimes-woman is something I’ll never be able to forget, as it was terrifying to me.  More support is needed for homeless who are LGBT , disabled, People of Colour and/or very young or old.  However much of the homeless initiatives I’ve seen tend to concentrate on straight white men.  Things need to be so much better.

Also included in the link above is my partial zine on how to safely run away if you’re an adult.  You can buy the complete zine on Etsy https://www.etsy.com/uk/listing/256116258/get-lost-a-guide-to-running-away-for?ref=shop_home_active_3 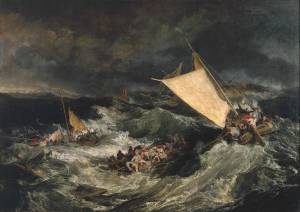 The Shipwreck by W.M. Turner

I almost didn’t write this.

I went to see the Turner and the Sea exhibition at the Royal Maritime Museum Greenwich.  I walked through the door, and came face to face with the Shipwreck painting.  It stopped me in my tracks.  I stood there, unable to go further.  A ship lay on its side in the background.  The ship was partly obscured by three small boats, full of panic-stricken people rescued or rescuing others from the sea.  The thunderous waters churned milky-white against the charcoal sky.  I felt the passionate swell and heave as my breath caught, trapped in my throat.  And when I could finally release the air it came out as an audible sigh.  I had never seen a painting like it.  I tried walking away, but I kept returning to it, gazing from different angles, trying to ignore the reflected glare of the lightbulbs in the gallery.  I wondered if the shapes in the rear of the painting were mountains or towering waves.

I looked up and to the right.  In the midst of such movement and pain, above the desperate souls thrashing about for those lost in the water, I saw the barest smudge of bright blue.  There was hope that the storm would clear; that fair skies and calm weather would return.  I felt able to move after that.  I had seen hope in the tempest.

I thought of all the times I had watched the morning sky brighten on my way to work, and how relieved I’d felt.  When depression closed around me at night, and during the short winter days, the thought of blue skies seem like a hollow joke.  It feels like things will never get better.  But I could identify that sliver of hope in the painting.  It made me remember the hope I try to weave into every story I write, no matter how bleak the subject.  The world I live in often feels like an unfriendly place for someone like me: a black, fat, queer survivor with a disability.  When I write, I place my characters in a world that is just like this one, but better.  In the fictional world, people give things a chance; they tell others how they feel.  They risk a lot, but the rewards are more than a “Happily ever after,” can provide.  Nobody gets magically rich, or made suddenly straight.  My characters can be just like me, or have elements of me, and they still have a blast.

I want my stories to generate hope.  I realise how vain that sounds.  I want people to read about folks like them, or maybe completely unlike them, and still care about what happens.  I just need to remember that hope for myself more often.